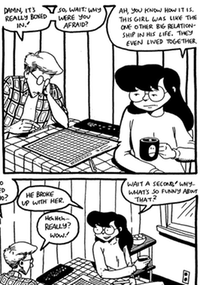 What are some of your favorite drawing tools (pens, pencils, markers, drawing tablet, all of the above)?

At this point, I mostly use two types of pens:

How do you like your color? Watercolor? Acrylics? Oil? Colored pencils? Markers?

I don't do color very often but when I do I use Prismacolor pencils. I like the subtlety you can get with colored pencils, compared with something like markers, but I've never been able to figure out a satisfying way to scan them. A recurring theme of this interview is going to be that I don't really know what I'm doing. 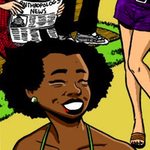 Is there any particular type of notebook or drawing pad you prefer? Or does any scrap of decent-sized paper work in a pinch?

I've learned that I like a very smooth finish on my paper. Unlike my pens, which I've stuck with for a decade, I've switched papers a few times, always to something with a smoother finish. I currently use Borden & Riley's #120 Bristol plate. I actually ordered about 20 pads worth last time, since sometimes it can be hard to find.

My first book, BOX OFFICE POISON, was drawn at a whopping 10 x 15" image size but now I've shrunk down to a relatively tiny 6 x 11". My art is not intensely detailed so I hoped I could get by (and fill pages faster) using a smaller size. The problem with drawing smaller is that you don't have a lot of room for error.

Do you ever do any kind of post-processing (like adding color in Photoshop or similar tool) to your drawings?

I'm very bad at computers so my artwork is pretty much exactly what you see on the printed page. It's funny: I graduated from art school in 1993 just before computers really became a thing and I fell behind on the computing curve. Oh well, next time.

Have you ever tried a new pen (or paper, etc) from reading about it, or seeing the results in another artist's work?

My friend Mike Dawson is the one who told me about the mysterious Japanese brush-pens so I have him to thank for that. 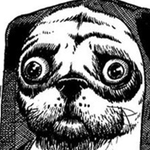 Do you have anything out of the ordinary you use for making your art?

I didn't think they were unusual but I was in the market for a new T-square and the art supply store only had two to choose from and they were hidden in a dark corner so that might qualify.

I asked about post-processing on a computer, but do you think the computer is a helpful tool for making art? Whether it’s looking for inspiration online, or using it to build a weblog to promote yourself and your art, do you think a computer is necessary, helpful, or a distraction (or all of the above)?

I think it's a mix. There's obviously a lot of fantastic digital work being created. I find the promotional aspect is a double-edged sword, personally. It's great to be able to promote and share your stuff on the web but it can also become a tail-wagging-dog phenomenon. I recently had a really fun time doing a silly short story, but when I posted it on the web it got almost no reaction so it soured me on continuing which is completely backwards. If I liked it--and it was probably the most fun I'd had drawing anything since I was a kid--it shouldn't matter what anyone else thinks but it's the 21st century and we all live in computers. In olden times you had to wait months to find out if anyone liked your stuff but I can confirm my self-loathing before the ink is barely dry.

You can find Alex Robinson online at comicbookalex.com, on Facebook, on Twitter (@arobtwit), on Tumblr, and he also acts as co-host of the Ink Panthers podcast.

Welcome to The Tools Artists Use. What do your favorite artists keep in their arsenal? Let's find out.

Start browsing the interviews and reviews, or find out more about this site.

The Tools Artists Use is a Bill Turner production. All content © Copyright 2009 - 2014. Copyright of artistic works belong to the artist.